St Viper’s School for Super Villains may not have taken over the world just yet, but it’s starting to gain followers. For the last couple of weeks, since its wild and noisy book launch, I’ve been visiting schools to tell young super villains about the book (see photos). I have an eight-year-old evil genius myself and our house is always full of kids, so I thought the school visits would be easy. That was until I found out that most of the year groups have about sixty pupils! But I had no need to sweat. The children got into the spirit of St Viper’s, demonstrating their evil laughs and telling me what super powers they would wish for themselves. In some of the schools I ran workshops on developing super villain and super hero characters. Interestingly, very few children chose to create super heroes.

They must have had fun because thankfully a good number turned up at my Waterstone’s event on Saturday 7th July. I was relieved to see them. I had been dreading being one of those unknown authors I’d seen in the store sitting uncomfortably behind a table, twiddling their thumbs, hoping someone will come up and ask for directions to the toilet.

To try to avoid this horrible situation, I planned craft activities: super villain eye-masks to colour and ‘Who’s Super?’ trading cards to make. Mini Boy, Rock Man, Smash Mash, Fang Face and Death Doom were some of the super-powered characters the children created. They gave their characters scores for power, speed, attack, defence and intelligence and were soon setting up their own games against each other on the carpet. One young boy arrived dressed up as The Hulk. The children also made their own entertainment: masked super heroes and super villains fought

each other with fireballs and lightning from behind the bookshelves. The lovely Waterstone’s staff (Kat and John) took it all in their stride and everyone had a fun time. My other big worry – having to sell my book to people and failing – didn’t materialise. I was so busy attaching elastic string to eye-masks, discussing the scores of children’s trading cards and signing copies that the book ended up selling itself. I’m sure some parents probably thought I was a children’s entertainer brought into the shop to do crafts with the boys and girls on a w 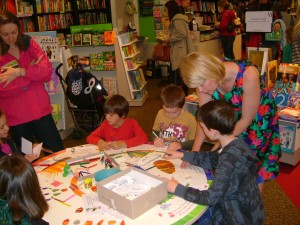 et and windy day, but Waterstone’s still said St Viper’s sold really well and commented on how the event had created a warm atmosphere throughout the whole shop.

The following day I visited the bookshop to pick up my art box. As I walked past a parked car I saw a girl on the back seat playing with the St Viper’s trading cards. My heart leapt with joy. World Domination starts at Waterstones!

Any WordPress-sponsored ads shown under are not sanctioned by Electrik Inc and do not have our support.