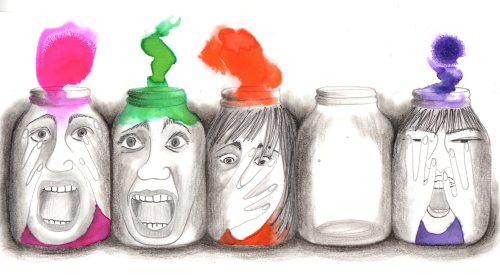 Mr Oddmore looked out of the kitchen window, frowning at the rhinoceros with two horns rolling in his vegetable patch and squashing a neat row of carrots.

‘What would you like for your birthday?’ Mr Peculiar adjusted the burgundy cravat he wore inside his open-necked shirt. ‘I’m afraid you can’t have my Sumatran Rhino; he’s new to my collection. I discovered him in a forest in Malaysia. But what about Shakespeare’s signature? A red diamond or the DNA of a dinosaur?’

‘I’m not a collector of rarities, like you,’ said Mr Oddmore. ‘No, what I want is a certain type of scream.’ He turned away from the window, his long gangly limbs seeming out of proportion to the rest of his body. ‘Come, I’ll show you what I’m missing.’

He led the way to the room he used as a gallery for his collection. It had floor-to-ceiling shelves full of glass bottles with cork stoppers that contained screams. A cloud of colour swirled inside each one. The screams had been ordered by colour and sound, starting with a luminous white scream in the top left-hand corner and ending many rows later with what looked like a thunderstorm.

Mr Oddmore picked up a random bottle, released the cork with a soft pop and they both leaned forward and listened. A high-pitched scream whooshed out. Mr Oddmore shivered and smiled a contented smile.

‘It’s the scream a five-year-old French boy made after seeing a headless ghost in a haunted hotel,’ he said. ‘I had to hide under the bed for two weeks to get it.’

He re-plugged the bottle, put it back in its place on the shelf and then allowed Mr Peculiar to choose a different one. The scream he picked was bright pink. He opened the bottle and a thousand excited female screams filled the air.

‘They were made during a boy band concert at Wembley Stadium.’ Mr Oddmore didn’t smile as much this time. ‘Pop concerts are guaranteed places to get screams, although they are always candyfloss pink and sound very similar.’

‘Only the rare is of value,’ said Mr Peculiar, pushing the stopper into the neck of the bottle and shutting off the noise. He placed the scream back on the shelf.

Mr Oddmore pointed further along the row. ‘You’ll notice I have a gap between lavender purple and deep plum. I’m missing an aubergine-coloured scream; one that is full-bodied, intense and emotional.’ He sighed deeply and added, ‘I haven’t been able to find it. That is what I want for my birthday.’

Mr Peculiar put his arm around Mr Oddmore’s shoulder and squeezed it. ‘Then, we will set about getting it for you. Rarities are my speciality, Old Chap!’

Over dinner ─ Mr Peculiar had brought with him a very expensive gelatinous soup made from the saliva nests of cave swifts for them to try ─ they analysed Mr Oddmore’s collection to identify the likely owner of the missing scream. He had screams from babies through to the very old; from people of every single country; and the screams of animals. He even had Mr Peculiar’s.

‘I’ve got it!’ Mr Peculiar banged his spoon on the table, making Mr Oddmore jump. ‘You’re missing your own scream!’

Mr Oddmore frowned. Why hadn’t he thought of it himself? He ran back to the gallery to collect a bottle and returned a few seconds later sounding breathless.

‘Here we go,’ he said and screamed into the open top.

‘Well, that was easy.’ Mr Peculiar returned to his soup.

‘It sounded forced ─ false.’ Mr Oddmore shook his head and peered at the colour. ‘It’s only tinged with purple, as though it’s been watered down.’

‘If at first you don’t succeed,’ said Mr Peculiar.

Over the next week, Mr Oddmore tried various methods he used on other people to extract a good scream from himself while Mr Peculiar headed off on an expedition to Eastern Russia in search of an animal close to extinction: the Amur Leopard.

Mr Oddmore walked along a dark alleyway at midnight and tapped his own shoulder; he didn’t scream. He dropped a spider inside his shirt collar; it tickled on its way down and made him giggle and wriggle, but not scream. At bedtime, he turned off all the lights and played a recording of ghostly moans; every dog in the neighbourhood began howling, giving him a thumping headache. He sobbed rather than screamed.

As soon as Mr Peculiar returned home from his trip, Mr Oddmore went to see him at his manor house. He rang the bell and various animals answered with shrieks, barks and chattering.

Mr Peculiar opened the door a fraction and peered out. ‘Give me a second, Old Chap’ he said. ‘I just need to shut the cat in.’

Mr Oddmore heard a low growl and a hiss and, somewhere deep inside the house, another door being banged shut. He wondered if he should come back another time, but a moment later his friend welcomed him inside. Mr Peculiar’s ginger hair looked ruffled and he had a jagged rip in the sleeve of his tweed jacket.

‘So, what have I missed?’ asked Mr Peculiar, showing Mr Oddmore into his study and opening a rare bottle of wine thought to have belonged to King Henry VIII. ‘Have you managed to perfect your scream?’

‘No.’ Mr Oddmore slumped on a tan leather chair. ‘I can’t make it sound convincing. I think it needs to be spontaneous, and I so very rarely scream.’

Mr Peculiar’s eyes sparkled and a smile started at the corners of his mouth. ‘Leave it to me. Collecting rarities is my specialty!’

‘What are you planning?’ asked Mr Oddmore.

Mr Peculiar poured the wine and said, ‘None of your business.’ He chinked his glass against his friend’s. ‘Here’s to a magnificent scream.’

‘I second that,’ said Mr Oddmore, smiling back at him.

Several days passed. Mr Oddmore expected to see Mr Peculiar’s face pressed against the window when he opened the curtains, or for Mr Peculiar to dangle him from an upstairs window. He wondered if his friend would tie him to a train track… He had constant butterflies.

But nothing happened, and the thrill of anticipation turned to sadness. He thought Mr Peculiar had forgotten all about making him scream, especially after the thought-to-be extinct dodo bird was found alive in Madagascar.

On the day of his birthday, Mr Oddmore felt thoroughly depressed. He went for a walk and got caught out in the rain. His shoes squelched from where he’d plodded through puddles, rather than edging around them.

When he arrived back home, his front door hung open.

Must have forgotten to close it, he thought. But part of him was worried he’d been burgled and he strode straight to his gallery to check on the screams.

He breathed a sigh of relief at finding nothing out of place. It wasn’t until he reached the middle of the room that he saw a leopard with rusty-orange and spotted fur crouched under a table, watching him. It padded out from its hiding place with its head extended forward and eyes fixed on its target.

Mr Oddmore ran for the door, screaming. The leopard catapulted towards him.

Mr Peculiar appeared in the doorway with an open bottle in his hand, blocking the way out. ‘It’s a good scream, but I think you can do even better!’

The leopard caught the back of Mr Oddmore’s shirt. Mr Oddmore screamed a terrified scream and pulled away. The material ripped, leaving his skin exposed.

Mr Oddmore began climbing the shelves, trying to keep his feet away from the bottles. The shelving rocked and creaked.

He glanced over his shoulder at the leopard looking up at him. His heart was thumping in his chest.

‘I don’t want you to make me scream any more,’ Mr Oddmore shouted to Mr Peculiar.

‘No need.’ Mr Peculiar held up the bottle. It was the shade of purple Mr Oddmore had been missing. ‘Happy birthday, Old Chap!’ He took a bag of cooked chicken out of his pocket and turned to the leopard. But before he had a chance to say, ‘dinner time,’ the big cat leapt onto the shelving, its paws knocking off bottles as it scrabbled upwards.

Mr Oddmore screamed and cried, ‘Make it stop!’ as he climbed higher.

‘Come down this instant,’ Mr Peculiar said to the leopard in a commanding voice.

It took no notice of him and lunged for the shelf above. The shelving tilted in the direction of the floor. The leopard fell off, but twisted in mid-air and landed gracefully on its paws. The remaining bottles flew off the shelves and shattered, producing an orchestra of screams.

But no scream was more intense or vibrant than the one Mr Oddmore now made as he watched his entire collection being destroyed.

The shelving followed the bottles and crashed to the floor with Mr Oddmore still gripping onto it.

‘My collection ─ it’s all gone,’ he said, his eyes filling with tears. ‘The only scream I have left is my scream.’

‘There is no point in you keeping it,’ said Mr Peculiar, sealing the bottle with a stopper and popping it into his blazer pocket. ‘I’m the one who collects rarities.’

Mr Oddmore thought about starting his scream collection again from scratch. But he remembered his own scream and decided against it.

Instead, he accumulated the world’s largest collection of rubber ducks.